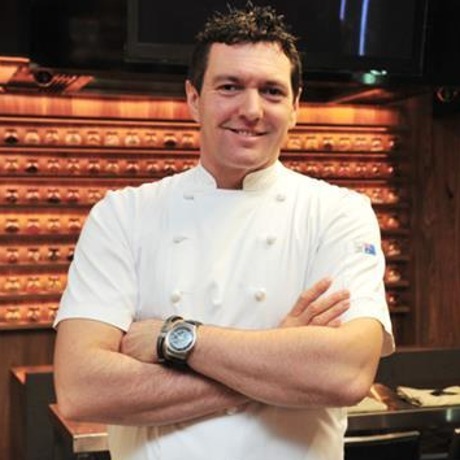 Justin North is no stranger to awards. He was named GQ Chef of the Year in 2010, and Bécasse, his previous restaurant, had held on to its two coveted Chef's Hats from 2003 - 2011. In 2007 Bécasse was named in the top 100 restaurants in the world and Best European Restaurant in Australia in 2009. Justin was awarded Chef of the Year in 2009, by the Sydney Morning Herald Good Food Guide.
Justin began his culinary career in New Zealand in 1992. During his apprenticeship he won a number of accolades for his cooking including the title of "Commis Chef of the Nation" in 1993 at the Culinary Olympics and the New Zealand "Apprentice Chef of the Year" in 1994. Justin developed a passion for French cuisine and travelled to Europe in 1996 to work in the kitchen of Le Manoir aux Quat' Saisons with Raymond Blanc. Justin returned to Sydney to join one of the city's most exciting kitchen teams - with Liam Tomlin at Banc.

From November 2001-2012 Justin ran his own restaurant with his wife Georgia - Bécasse - starting out in Surry Hills. Bécasse received critical and public acclaim and was named Best New Restaurant in 2002 and Best European Restaurant in Australia 2004 by the Restaurant and Catering Association. In July 2005 the North's relocated Becasse to 204 Clarence Street and the restaurant developed and evolved into one of Sydney's premier dining spaces.

Justin is passionate about "ethical eating" and sustainable produce. At Bécasse he regularly hosted the popular "Producer's Lunch Forum" highlighting the work of Australia's most innovative and dynamic producers.

Justin is the author of two award-winning books Becasse: Inspirations and Flavours and French Lessons. Both books were re-issued in 2010, and his third book, Family Cooking, was released in September 2013.

Justin's TV credits include guest spots on Masterchef Australia and Junior Masterchef as well as appearances and cooking segments on Nine's Today Show, The Lifestyle Channel's Christmas Special, Mercurio's Menu (a Sydney Special) and The Circle.

Alongside businessman Tim Jolley, Justin opened The Burger Shed in Mosman in 2013 and in 2014 Justin joined forces with Sydney based company Halcyon Hotels to open the new Hotel Centennial, due to open in April 2014.

Civet of Clam, Oyster and Hapuka