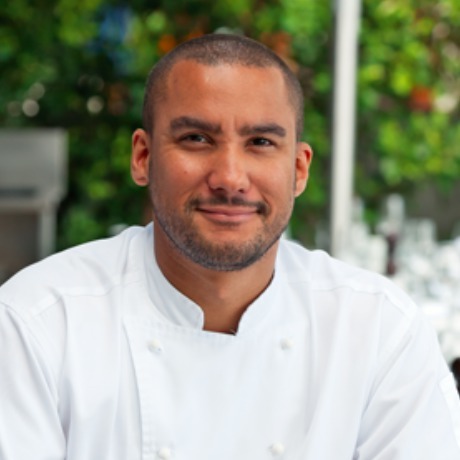 With a preference for ‘no nonsense’ food, Gareth’s approach to cooking is about simplicity and flavour. Joining Euro as executive chef in July 2015, his dishes deliver fresh exciting flavours while showcasing the very best seafood and other locally sourced ingredients.

Joining Nourish Group as executive chef in July 2015, Gareth is already making his mark on Euro, an awarded dining institution that first opened in 1999.

With a background in classic French cuisine and fine dining, he says his approach has evolved over the years. “Today for me it’s about the guest rather than the food the chef wants to cook. Diners want something fresh, energising and new, with a bit of a story. They want to know a product was farmed ethically and produced naturally.”

Making rock cakes with his mother every weekend from the tender age of eight, Gareth’s love of cooking started early. Growing up in Portsmouth in the UK, his first experience in a commercial kitchen was at age 15, doing work experience at the local Queen’s Hotel. Taught the basics of classic French cuisine by a supportive Head Chef and hooked on the challenge of a busy kitchen, he left school at 16 to cook fulltime.

At age 18 came Gareth’s first big break, when the hotel’s sous chef helped him land a job at the prestigious Claridge’s Hotel in London. A second break at 23 saw him join the kitchen at Michelin starred The Greenhouse in Mayfair. It was there, while working with some of the best food and other like-minded chefs, that Gareth truly realized his love of cooking.

A host and judge My Kitchen Rules since 2014 alongside fellow award-winning chef Ben Bayly (The Grove, Baduzzi), the high-profile chef says he feels lucky to be part of the hit TV show. “Flying around this beautiful country and getting to meet all these contestants, getting dressed up and being fed, giving our opinion on the food – it’s one of the best jobs in the world.”

Passionate about food, service and restaurants, Gareth says he loves trying other chefs’ food and never ceases to get a kick out of sitting in a restaurant, and taking in the atmosphere, smells and sounds.

Outside of work, Gareth relishes time spent with his two boys Harley and Freddie and wife Angela. “Seeing my sons get into fishing is the best feeling and one of the reasons I wanted to move to New Zealand, it’s such a great place to raise kids.”