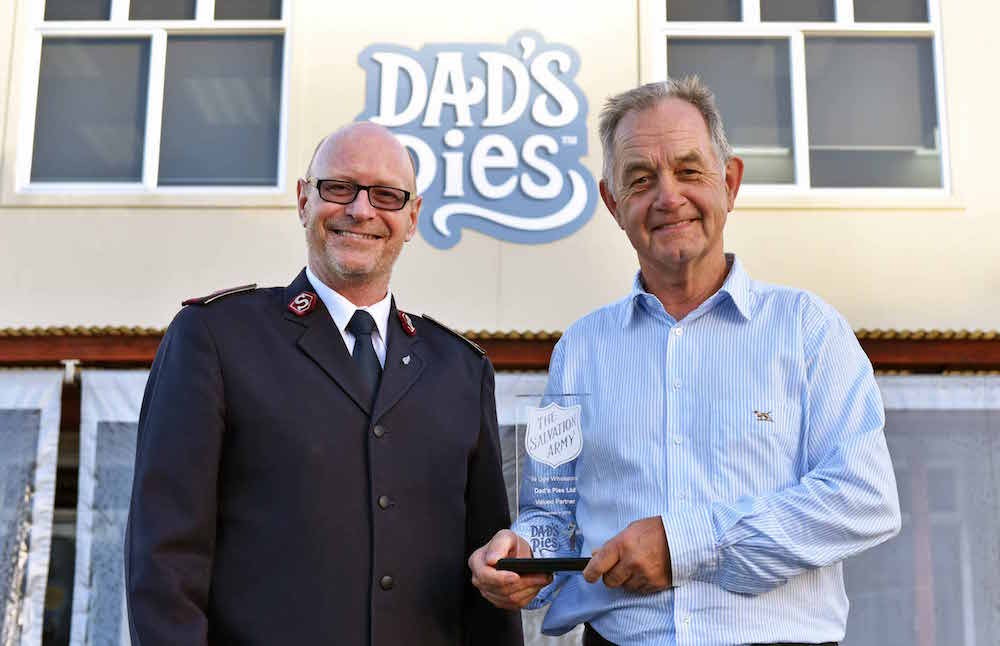 Local pie company Dad’s Pies Ltd was recognised today for its generous and long-standing support of Kiwis in need through its product donations to The Salvation Army. Since 1997, more than 114,000 pies have been donated to The Salvation Army’s foodbanks in Whangaparoa, Northcote and Manukau. In recognition of this substantial contribution a Valued Partner plaque was presented to Managing Director Eddie Grooten by The Salvation Army’s Territorial Commander Robert Donaldson.

Salvation Army National Secretary of Social Services Major Pam Waugh says donations such as these ease some of the pressure of procuring food for around 55,000 food parcels a year. “Meeting this level of demand can be very difficult so it’s immensely reassuring for our foodbank managers when they are helped by generous local businesses who are willing to provide regular food donations – even more so when the donated food product is so popular with clients,” she says.

Eddie Grooten Dad’s Pies Founder and Managing Director says their decision to support The Salvation Army in 1997 was easy to make. “We knew about the good work done by The Salvation Army in local communities and were pleased we could help them make a difference to those in need. Over time, as we’ve grown our business the need in our communities has also grown, so it makes sense for us to continue to contribute where we can,” he explains.

Major Waugh says Dad’s Pies long-standing support has provided a degree of certainty in the provision of emergency food aid. Food parcels are an important tool in helping clients move on from difficult periods in their lives and regaining their independence. The portion of the family budget that would normally be spent on food can be redirected to paying debt or dealing with unexpected costs such as school or medical fees.